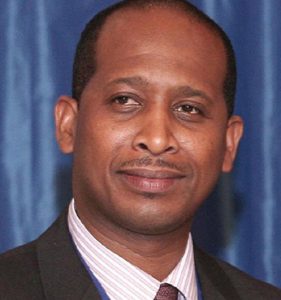 For the past 25 years, Cyprian Gibson has been making a splash in the world of water. He is a Civil/Environmental Engineer, and holds a B.Sc., and a B.Eng (Civil), from Acadia University and the Technical University of Nova Scotia (Dalhousie) Canada, and a MBA (Hons.) from Nova Southeastern University in Florida.  He is a Chartered Member of the Institution of Civil Engineers (London), and a Chartered Environmentalist, from the Society for the Environment.

Professionally, Cyprian serves as the Assistant General Manager with responsibility for the Family Islands, for the Bahamas Water and Sewerage Corporation (WSC). He is tasked with supervision of WSC’s operations and capital projects on the Family Islands, which involves some 50 water supply and distribution systems (25 reverse osmosis plants, and 25 water supply reserves), and commercial centers on some 25 islands and cays.  His scope covers In-House, as well as Public (Central Govt.) and Private Developments.   He has also been involved in the preparation (and support) of a $41 Mn. Multi-Island project funded by the CDB.  Previously he was pivotal in the procurement of the $81 Mn. Loan from the IDB, $20 Mn. of In-House FI Expansion Projects funded by Central Government, and a $21Mn. IDB funded Expansion Project on the Family Islands.

Nationally, Mr. Gibson has also previously served on several industry-related, inter-agency Committees in the Bahamas,  such as the Private Roads and Subdivisions Coordinating Committee, the Public Utilities Coordination Committee, the Hotels Encouragement Act Advisory Committee, The National Emergency Management Committee, the Science and Technology Committee of the BEST Commission (Bahamas Environmental Science and Technology Commission): as a Director of the Nassau Airport Development Company (NAD), and the Airport Authority (which undertook a $400 Mn. Airport Expansion).   He also served as President of the Bahamas Society of Engineers as well as a founding member and advocate for the Professional Engineer’s Board of the Bahamas.

He smiles fondly when he recalls an article featured in the local newspaper entitled, “Fresh Water is Here”, that highlights when he brought water to San Salvador, in a local community in the Family Islands of the Bahamas, and to this day, recounts this as one of his most fulfilling career moments.

Cyprian is a longstanding member of the Caribbean Water and Wastewater Association (CWWA) and has held several Executive positions, including President. He has served as the representative for the Caribbean Water Operator Partnership, and as a Past PreGrid Buildersident on the CWWA Finance and Business Enhancement Committee.  He is a founding member of the Bahamas Chapter, and has served as Conference chair on more than one occasion when the conference was held in Nassau. He currently serves as a Member of the Steering Committee for the Global Water Operators Partnership for the Caribbean.   His love for the Association is evident when he recalls how far CWWA has come, and is proud of the role he has played in its expansion from an association with a national focus into a regional association operating in a global environment. His vision for the CWWA is that it continues to stretch toward global sustainability, and he is more than willing to assist in any capacity that he can.